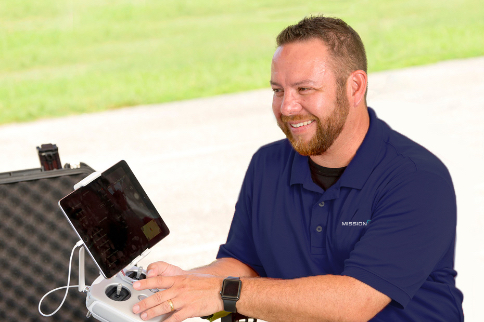 Originally from Knoxville Tennessee, Mr. Ryan Henderson is a Southern Maryland transplant. He attended the University of Tennessee where he earned a B.S. in Business.

His UAV experience started several years ago with RC planes. Since then, Ryan has been involved in a variety of projects ranging from search and rescue, precision agriculture, Counter UAS detection data acquisition, maritime operations, and cinematography. Certificated both as a manned and remote pilot, Ryan has hundreds of hours logged for both fixed and rotary-wing aircraft and has piloted UAS ranging in size from 250 grams to 450 pounds. Ryan is certified as both a Private Pilot and FAA Part 107 UAS Pilot and was the Chief Pilot at the University of Maryland UAS Test Site. Further, Ryan has extensive knowledge in flight control systems, command and control links, and radio relay. He is a subject matter expert on airworthiness analysis and has participated in global operational deployments including disaster stricken and harsh environments.

Among his various and storied accomplishments, Ryan was the remote operator for the first transportation and delivery of a transplanted organ via an unmanned aircraft, conducted the first civil commercial delivery of medical supplies across the Chesapeake Bay via unmanned aircraft, extended command and control of an Army EOD robot from hundreds of yards to 50 miles via unmanned aircraft and mesh networks, demonstrated prototype solar supplemented flight for DOD and the Thai military, created an over the horizon command and control network for surface vessels via unmanned aircraft and mesh networks, successfully completed satellite reflectively validation on both the east and west coast for NOAA, and mapped over 80% of the country Dominica in support of hurricane disaster recovery efforts.

At MissionGo, Ryan’s responsibilities include overseeing all flight operations, managing pilot and crew currency and qualifications, managing all SOP’s/Instructions, directing all Operation Readiness Reviews, curriculum creation and facilitation, and maintaining all UAS records. He is an airspace analysis expert that has been called upon multiple times for Certificates of Waiver or Authorization (COA) and Part 107 Waivers. He is at the forefront of gaining FAA certification for unmanned vehicles flying Beyond Visual Line of Sight (BVLOS), at night, and over populated areas. He was part of the team that created the first FAA COA for flying transplant organs in an urban environment.

As wide-ranging and unique as his many accomplishments, Ryan enjoyed conducting aerial filming for the CBS series “Hunted”. In his spare time, he embraces his passion for all vehicles whether they fly, float, sail, or roll.